It’s always so useful to share your progress with the course team.

I’ve been working up ideas at home and focusing on an endgame to express a space and demarcating it as a solid perceptible entity.

Thinking this far forwards, ie focussing on creating a structure, may be pre-empting the course of my emerging practice and has raised issues with my anxiety levels, in terms of practicalities and planning given my remote and small studio. Even just thinking about the practicalities and problematics of scale has set of surprisingly strong feelings of anxiety. The total upside of talking through my concerns with AL has helped me refocus. AL is so practical and has vocalised and coalesced my own thinking.

Contextualising where I started, the development of my current drivers and the elements which where in my practice at the beginning on this MA draw a line between the then and now.

If I pick apart what is driving the idea behind how I have expressed my draw towards creating works to be touched I can see that there is a connection in the layering of prints to the format and connection with a book; all be it a deconstructed book, this materialises in allegory and in the credence I attribute to the representational and physical layering in my constructions.

Resituating the framework and refocusing on a positive implication for the space between you and me forges strong biographical connection. The presence of layering works as a link to the concept of a book.

In my minds eye these give credence to a connection to the idea of conversation and the multi layered connotations implicit in individuality of interpretation or reinterpretation.

Added to this the concept that the idea of the book is to take the prints off the wall and bring them into immediate proximity with the audience.

I love describing my thoughts as narrative and have a natural ability to express this in line.

AL was enthusiastic about my drawings of the figures in their spaces and would like to see these developed further and described into prints.

AL also suggested that the idea of Marquette’s and books may be a way of:

Describing my concepts at a scale which is manageable and more easy to approach.

That experimenting at this scale may lead in a different direction or may result in a grand scale object but that the work I do on the ideas between now and, say January, will give clarity or may act as a support or background to any development. And, on the other hand they could equally be the body of work.

She also pointed out that I am an experimenter and that this was a part of my practice that I should bring intentionally highlight and enjoy.

I should research Printmakers who work with objects, whose practices have elements of audience participation and who are interested in the textual qualities of print.

The idea of the participatory element which featured last year and again at the wedding (balloons) is something which is perhaps under utilised, could feature more prominently and AL has encouraged me I to find a way to include this aspect. I will seriously think about how I can approach this without the angst.

Also AL emphasised that I must feel it’s ok to talk about how I’m feeling and be prepared to step back or slow down rather than put myself in a situation which is making me feel so anxious. 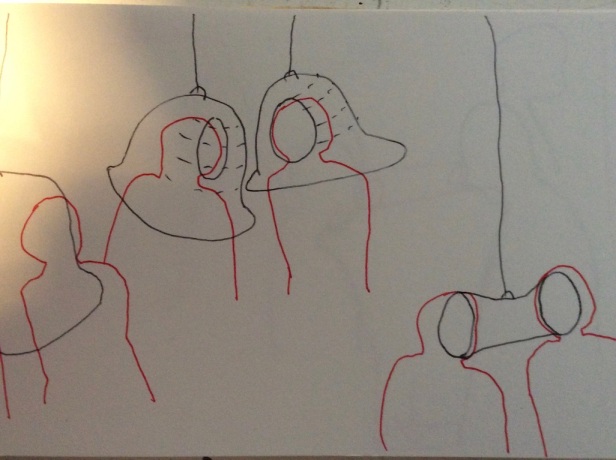